As Christmas draws closer by the day, we asked our members what was top of their academic Christmas list. There were some specific suggestions about research topics, with calls for more creative approaches, increased recognition of the value of qualitative and mixed methods research and the championing of more research looking at fluctuations in suicidal ideation and self-harm across hours and days. Suggestions were also made regarding the need to change-up the status-quo in publishing with wishes for less resistance to getting solid research, with null findings, published. But, notably, the most sought-after things on members’ Christmas lists, were about academic life. 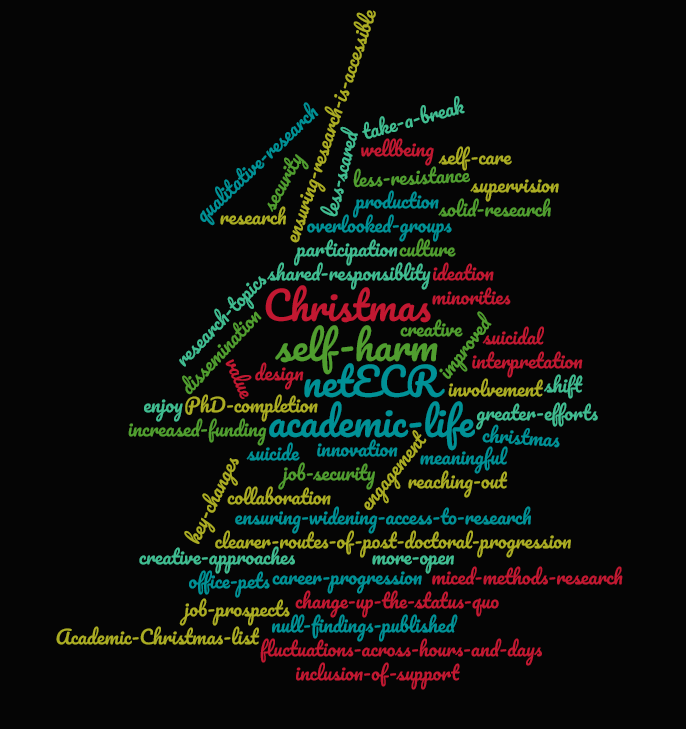 Many of these centred around some solid suggestions in relation to researcher well-being and self-care: from creating a culture where people feel able to take a break – and enjoy the holiday season – to a shift towards the inclusion of support for researchers working in self-harm and suicide becoming a routine feature in research protocols and supervision (and one suggestion for the introduction of office pets!). Some appealed for key changes to academic life, job prospects and career progression, with a real sense of a wish for security expressed: from increased levels of funding for mental health research, to clearer routes of post-doctoral progression and job security post-PhD completion.

Amongst the Christmas wish lists there was also a clear call for improved, meaningful and creative involvement and engagement activities. Alongside this was a sense of shared responsibility in ensuring widening access to research: from innovation, design, production and participation, to the interpretation and dissemination of findings. netECR member’s expressed a desire for gatekeepers (such as those based within schools and higher education contexts) to be more open – and less scared – to engage with research focussing on suicide and self-harm, particularly where young people are concerned. In addition, there was a call for researchers to invest greater efforts into ensuring that their research is accessible, and reaches out to, minority, and often overlooked, groups (considering gender, ethnicity, sexuality, social class, religion, (dis)ability, etc).

Finally, and reassuringly, there was a wish for a world where we have more of an explicit focus on collaboration, rather than competition, across all levels of academia – basically for the research community, in general, to be a bit more netECR(!) – we can certain say ‘cheers’ to that!

Thanks to all our members for sharing their Christmas wishes for 2018 – we’d love to hear more about what would be top of other people’s lists, so do tweet us @netECR.

All I Want For Christmas Contributors
(in alphabetical order):