The Citizenship, Recovery, and Inclusive Society Partnership (CRISP) programme [1], led by the University of Strathclyde, has brought together leading academic institutions and third sector organisations from across the EU and the USA to share knowledge on approaches to social inclusion and mental health. As a result of this project, we were both fortunate to be given the opportunity to travel to Finland for a unique knowledge exchange opportunity. Based in the Finnish Association for Mental Health (FAMH, also known as Mieli), we had the chance to spend one month speaking to experts within research, policy, and practice to learn about Finland’s approach to mental health promotion and suicide prevention.

As both of our research focuses on the Scottish context, we were keen to learn about the work currently taking place in this Northern European nation, as it gave us an opportunity to compare and contrast approaches to suicide in different countries. In 2017, there were 824 deaths by suicide in Finland, corresponding to a rate of 15 per 100,000 population [2]. Recently, Finland has been working on a new national suicide prevention programme, with exciting developments to come. While it is, of course, impossible to summarise a nation’s efforts into one blog post, we discuss some notable activities in the areas of suicide prevention, intervention, and postvention.

At FAMH, the education system is one in which mental health promotion has grown substantially. In 2004 “Health Education” was introduced in which life skills are taught (e.g., healthy choices in everyday situations). In a meeting with a member of the mental health promotion team at FAMH, the introduction of Health Education was FAMH’s “golden ticket” to enter schools. Upon entering schools FAMH co-created mental health teaching with mental health education teachers. What stood out for me was the range of materials which have been developed. Information in these materials is based on the health education curriculum so nothing has been added or taken away but rather because health education was so vast, FAMH provided compact versions which were easy to implement. One example of this is the range of posters which capture themes in the curriculum which addresses the teacher’s need for material. Recently, FAMH progressed to develop materials for early education which included the beautifully illustrated early education manual called “Child’s Mind – Mental health promotion in early childhood education and child health clinics”. This covers a range of themes (e.g., empowering emotions) and encourages professionals to notice things early and let the child talk about their worries when they start, to prevent later mental health issues as an adult. When I reflect, this step into early education is a positive step made by FAMH in suicide prevention.

As part of a national project to promote mental health, wellbeing and early intervention, FAMH has provided thousands of citizens and professionals with training in Mental Health First Aid. The programme is broken down into three units: 1) mental wellbeing and skills to promote mental health, 2) education on mental health problems and supporting people, and 3) mental health first aid for parents or professionals working with young people. The programme has reached almost 30,000 people in Finland, and has been translated into other languages. Speaking with staff at FAMH, it was clear that a big part of its perceived success is its emphasis on mental health promotion; staff continuously reiterated that mental health skills are important for us all, not just those who may be struggling. It was nice to see that FAMH as an organisation goes a long way to promote staff’s physical and emotional wellbeing, and in doing so they certainly practice what they preach.

FAMH is currently delivering the Attempted Suicide Short Intervention Program (ASSIP). A meeting with a member of staff who delivers ASSIP provided a rich personal insight into the process. One of the stages in ASSIP which stood out for me, as an early career researcher, was that the clinician would only ask one question in the first session which was, “How did suicide become an option – what is your story?”. Importantly, the narrative shared is essential to the rest of ASSIP. The client telling their story is videotaped and this also appeared to be observed by the clinicians at FAMH as vital, as when the client re-watches their story they appeared to show empathy toward themselves for the first time which one member of staff at FAMH described as “the beginning of the healing process”.

A randomised controlled trial (RCT) of ASSIP is currently ongoing at FAMH which will expand the current research for this intervention. I was informed that there were differences between the sample in the current RCT compared to the sample in previous research (e.g., history of psychiatric care) and whether or not there will be a difference in the effectiveness of the intervention due to this will be an interesting result. This learning experience left me with many questions including: How much does the narrative contribute to intervention effectiveness? Will ASSIP become a leading intervention in suicide research?” I do hope that in time these questions can be explored.

Since 1995, FAMH has developed and run peer groups for individuals bereaved by suicide. Their “On the Path to Recovery” model [3] is based on professionally guided peer support, recognising the value of sharing individual knowledge and experiences. Groups of 5-10 people meet for 10-15 weeks, with an additional follow-up session, following a clear and progress-oriented structure. The content covers themes such as recounting of loss stories, reactions to loss, coping mechanisms, self-compassion and forgiveness, remembrance and looking to the future. We spoke to two professionals who facilitate the groups, and while they noted that gathering enough participants to set up groups can be challenging in a relatively small and dispersed population such as Finland’s, feedback from attendees has been consistently positive. It was also notable that staff stressed that as professionals they are only there to facilitate, and accept the position of ‘not knowing’, acknowledging individuals as experts of their own experience.

Another postvention resource is offered by Surunauha (or “Grief Ribbon”), a national peer support organisation whose aim is to increase transparency and promote open discussion about suicide, ultimately to reduce stigma and prejudice. Made up of over 800 members across the country, they offer monthly peer support meetings, one-to-one support, events and seminars, online forums, and annual retreats. Activities are organised by trained volunteers who have themselves experienced a suicide loss. Some of the biggest challenges they face are reaching men, young people, non-Finnish speakers, and funding. Surunauha also collaborates with FAMH to deliver groups, and often works alongside the media to advise on safe reporting of suicide. Like FAMH, Surunauha stresses the importance of peer support, and the value of such organisations in Finland is evident.

Overall, our time in Finland was invaluable and this blog is a snapshot of what we learned. Suicide prevention in Finland spans from education to postvention and each of these is embraced by FAMH to reach its full potential. With a new national suicide prevention programme on the way, it is an exciting prospect to see what Finland’s next steps will be and the role FAMH will have. We are very grateful and would like to take this opportunity to thank both CRISP and FAMH for this experience and will take the learning we have gained from our trip into our current and future research. 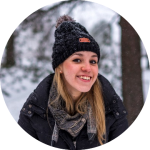 Laura del Carpio (@delcarpio_laura) is a PhD student in the School of Psychological Sciences and Health, University of Strathclyde (laura.del-carpio@strath.ac.uk).

Abigail Paterson (@abigailzp) is a PhD student in the School of Psychological Sciences and Health, University of Strathclyde (abigail.paterson@strath.ac.uk).

1 thought on “Approaches to suicide in Finland: Reflections from an international secondment”