Suicide Bereavement UK’s 6th International Conference saw over 350 people, from 8 countries and a range of backgrounds, come together to share their work, thoughts and experiences on the topic of ‘Looking Forward, Instilling Hope’.  The one day event was held in the somewhat unorthodox, yet fantastic venue of a cinema in Manchester (think big, comfy seats and the occasional waft of fresh popcorn smell). If that didn’t make for a welcoming enough atmosphere, then the opening speech from conference Chair, Malcolm Rae (OBE FRCN), certainly did. He set a warm and supportive tone that echoed throughout the conference, encouraging attendees to reach out to one another, show emotion freely, feel able to discuss difficult topics and make use of a quiet room, manned by trained Samaritans, should it be needed. The availability of this room was something I was particularly happy to see and illustrates the careful consideration taken in planning the conference to ensure a safe, supportive environment for all.

Delegates were then treated to a performance by Ado Matheson, who’s music is inspired by the people he has lost to suicide, including most prominently his youngest son. His ability to produce something so beautiful from something so painful blew me away. As it turned out, that was only the first of many times I felt this way during the course of the day.

Next up, Professor Julie Cerel, President of the American Association of Suicidology, used her work on the broader impact of exposure to suicide to smash through some misconceptions about suicide bereavement. Her research has shown that each suicide could affect around 135 people [1]. Much higher than the six people which was previously touted widely within the literature. Considering there were 6,639 reported suicides in the UK in 2015[2], this equates to nearly 1 million people who were exposed to suicide in that year alone. The myth-busting continued after a brief caffeine break when Professor Nav Kapur, leader of the National Confidential Inquiry into Suicide and Homicide, spoke of the role of self-harm in suicide. Did you know the most common cause of hospital admission is self-harm? And, did you know half of young people who die by suicide have a history of self-harm?[3] Professor Kapur urged us all to make sure we never think of self-harm as ‘just attention seeking’, be aware of its implications for future suicidal behaviour, and reminded us of the importance of providing a listening ear to those in distress.

Thanks to the research by Professor Cerel and her team, the real and pressing need for broader and more comprehensive support following a suicide is clear. Dr Sharon McDonnell, Director of Suicide Bereavement UK, and her colleagues are hot on the heels of this issue using the conference to launch the National Suicide Bereavement Survey which is open to anyone in the UK who has been exposed to suicide. They were keen to stress that this includes people who work in clinical or public services and who may have been exposed to suicide as part of their job, as this is a group of people who are often overlooked in suicide bereavement research. Encouragingly, hundreds of people have already filled out the survey. However, every single view is vital as this work will provide the insights needed to ensure proper and timely support for those caught in the ripple effect of suicide – if you feel you can; please follow the link at the end of this blog post to participate.

After lunch (and some delicious chocolate brownies) we split into small groups for afternoon workshops. The range of workshop speakers was phenomenal so choosing just the one was difficult to say the least! I settled on the talk given by Elizabeth Burton-Phillips, founder of the charity DrugFam which offers support to families bereaved by addiction and often, suicide associated with addiction. A recent stint shadowing the Psychiatric Liaison team in my local hospital’s A&E Department opened my eyes to the true extent of the link between drug addiction and suicide, so I was keen to learn more about support for families affected by these tragedies. There simply aren’t words strong enough to accurately describe how inspirational Elizabeth is, but her recently awarded MBE is testament to that. The strength which radiates from Elizabeth, and the countless others who share their experiences with researchers, meant the conference aim of instilling hope was certainly met. It is impossible to not feel hope in the presence of people who have gone through some of life’s toughest adversities and emerged fighting to ensure others don’t have to.

The afternoon was rounded off by Dr Wesley O’Brien getting us all up and moving to highlight the importance of physical activity in mental well-being and Dr Alys Cole-King battling the stigma surrounding suicide by showing how everyone can move from suicide naivety, through awareness and alertness, to suicide safety. Again, the importance of connection was really emphasized here and this notion of connectedness is what I took away as the main message of the day as I headed for my train home. To tackle suicide and the bereavement associated with it, we need strong communication between researchers, clinicians, services, the public and, perhaps most importantly, those with lived experience. Connecting with, properly listening to, and opening up to each other can truly be life-saving. 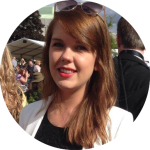 Charlotte Starkey (@cellstarkey) is a psychologist and a PhD student in the School of Social Sciences, University of Dundee (c.a.starkey@dundee.ac.uk).